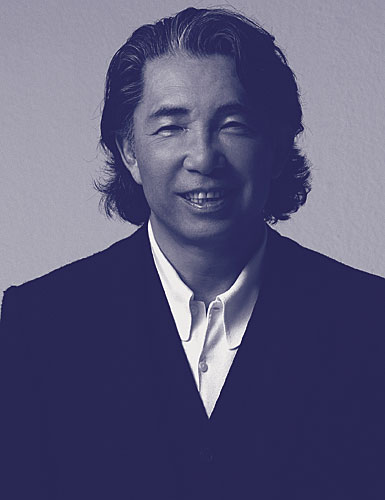 Kenzo Takada was born in Himeji, Hyogo, Japan; at the age of 19, he entered the Bunka College in Tokyo, a prestigious
fashion school. He arrived in France in 1965 and opened his first boutique, Jungle Jap, in the Galerie Vivienne in Paris in
1970. It was an immediate success, for in the same year he appeared on the cover of Elle magazine. In 1971, he presented
his collection in Paris, Tokyo and New York and overnight became an international sensation. With his success growing, he
opened a studio and boutique at Place des Victoires in 1976, launched his collection for men in 1983 and his first boutique
for men at 17 boulevard Raspail in 1987. In 1984, Kenzo Takada was named Knight of the Order of Arts and Letters. The 90's
were marked by the creation of perfumes for men and women, various prestigious shows in Asia, including in Tokyo and
Osaka, and a great 3-day fashion show in his native town with 22,000 spectators. He also opened a Kenzo boutique in Hong
Kong. In 1990, Kenzo Takada organized a gala event at the Ecole Nationale Supérieure des Beaux Arts to celebrate the
twentieth anniversary of his brand. In 1993, Kenzo S.A. was acquired by the LVMH group. In 1999, Kenzo Takada celebrated
thirty years of creation with an immense, spectacular show at the Zenith concert hall, tracing his entire career. He
announced his departure and left the LVMH group to travel and make new discoveries. In 2004, fortified by his voluntary
withdrawal and enriched by multicultural experiences, he created the Gokan Kobo brand, which in English translates to
"the studio of the five senses", designing fashion and products for the home with the same universal vision due as much
to his life experiences as to his continued passion for the world around him.